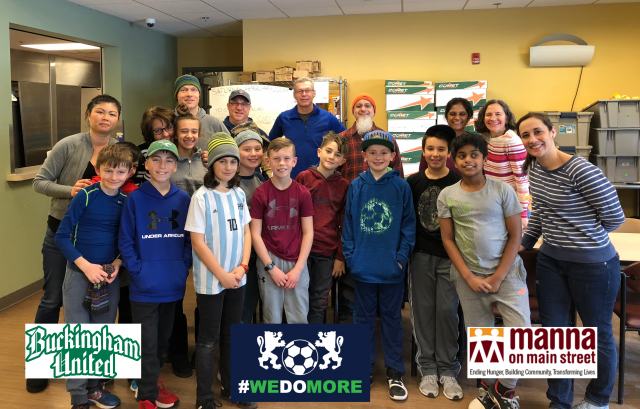 Buckingham United Soccer Club U-11 Boys 2008 Green Team shed their cleats and shin guards for cutlery and food service and took teamwork to a new level when they arrived at Manna on Main Street in Lansdale on Saturday, February 02, 2019.

The service project featured players, parents and coaches who catered lunch to area persons impacted by poverty and hunger in the North Penn area.  The bitter cold brought in dozens seeking to be fed through community contributions at the food pantry and soup kitchen where the boys took orders, served hot and cold beverages, and cleaned up following the event which ended with a tour of the facility.

Vince Caperelli, Jr., the Development Director for Manna on Main Street who also doubles as the BUSC U-11 Boys Green Team assistant coach, remarked that the boys were fully engaged and appreciated the invaluable experience.  Coach James Blair acknowledged that BUSC was delivering on a community service-oriented philosophy which promotes good will and awareness.  Buckingham United Soccer Club is a youth sports non-profit club under Central Bucks Athletic Association founded in 1973 that offers recreation and travel Basketball, Lacrosse and Soccer.

In 2018, Manna on Main Street served over 37,000 restaurant-style meals for the working poor, the elderly, the homeless, and anyone in need.  The facility is open 7 days a week with 2 meals per day Monday-Friday and brunch on Saturdays and Sundays.  In addition to being a public soup kitchen, Manna also features a grocery-style Market, emergency financial aid for necessities like rent and utilities, and educational programs.  To volunteer, contact Manna on Main Street @215/855-5454 or visit them at MannaOnMain.org.